Plan your
round the world trip

Most rankings of the best dive sites in the world are based on the author’s subjective opinion. This one here is different. It’s based on a large survey we carried out from 20th September to 10th October 2019, with 801 divers among our readers and members of several Facebook groups for divers.

Of the 801 survey respondents, we only kept those who’d dived in at least six different locations. On average, the selected respondents had 98 scuba dives under their belt.

Some sites, however exceptional, are mentioned less often because few travellers visit them, even though they deserve to be at the top of the ranking.

So, instead of simply ranking the dive sites according to the number of times they were mentioned, we chose to do a calculation that’s a little “smarter”.

The dive spots are ranked according to this ratio: number of mentions of the site in the top three / number of respondents having dived at this site. 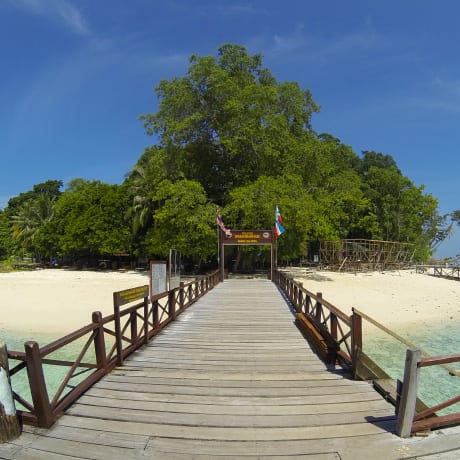 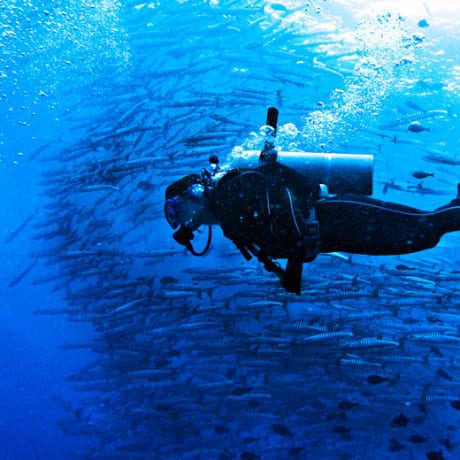 A school of barracudas in Sipadan

Sipadan is a small lush island in the northeast, just off the Malaysian part of Borneo. It was made famous by the French marine explorer, Jacques Cousteau.

It’s “very well protected”. A strict quota limits the number of divers allowed there per day. You can’t sleep there and the military ensures that the tourists who come ashore don’t venture beyond the authorised limit. These measures ensure that the place is extremely well preserved, both on land and underwater.

On about ten sites, along a drop-off where most of the diving takes place under 20 metres, you can see huge schools of barracudas, real compact balls of hundreds of blue runners, lots of humpback clown fish, turtles or even small reef sharks by the dozen, sometimes hammerhead sharks and even an unusual cave, “Turtle Tomb”, full of turtle skeletons. 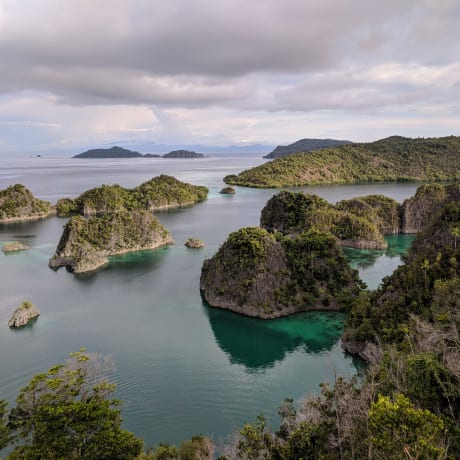 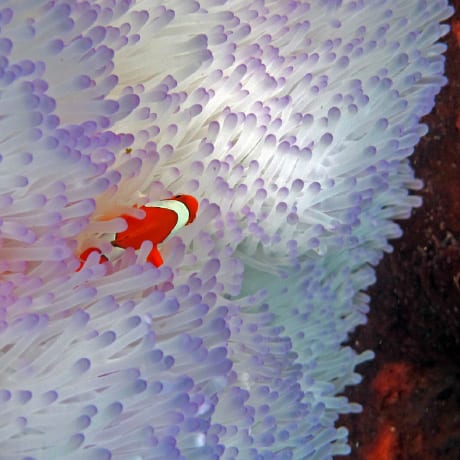 A clownfish in its anemone

Raja Ampat is an archipelago made up of around 1,5000 islands, usually mountainous, which is located in Indonesia, west of Western New Guinea.

It’s at the heart of the “Coral Triangle”, which is thought to be the most diverse marine area in the world.

There aren’t many inhabitants on the Raja Ampat islands and they’re really not that touristy. It gives a wild and lush end of the world vibe. There are numerous dive sites and they’re all incredible, whether it’s towards the Dampier Strait or Misool island. The sea life is abundant and the coral is perfectly preserved, with a variety unlike anywhere else in the world. 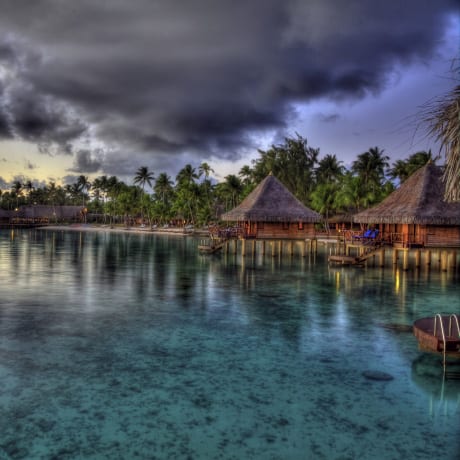 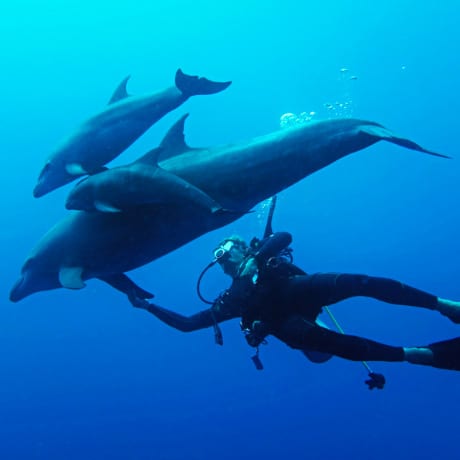 Diving with dolphins in Rangiroa

Rangiroa is a coral atoll in the Tuamotu-Gambier archipelago in French Polynesia, which is part of the Palliser Islands group.

Rangiroa is the second largest atoll in the world. Marine life is particularly dense there. You can dive with dolphins, countless sharks, like the hammerhead and the tiger. The current is strong in places, so it whirls you along whilst you admire the seabed. 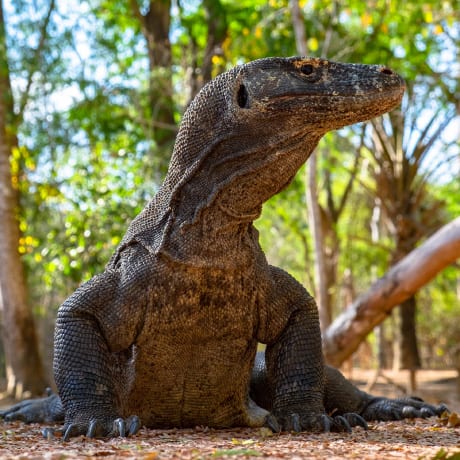 In inland Komodo you can see the famous Komodo dragons 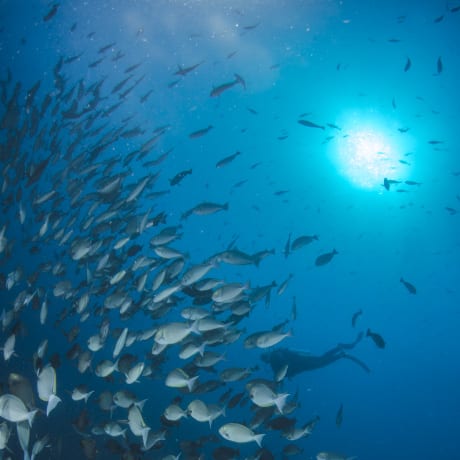 Diving with the lil’ fishies

Komodo is a southern central island on the Indonesian archipelago. It’s known for its famous Komodo dragons and, of course, for its world class dive sites.

There are lots of sites and they’re often quite far from the shore. To really get the most out of this extraordinary area, many choose to embark on multi-day diving cruises on “liveaboard” boats which, over there, are often beautiful traditional wooden boats. 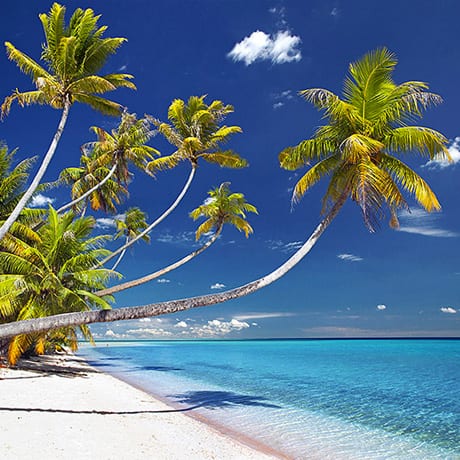 Fakarava is the cliché of paradise 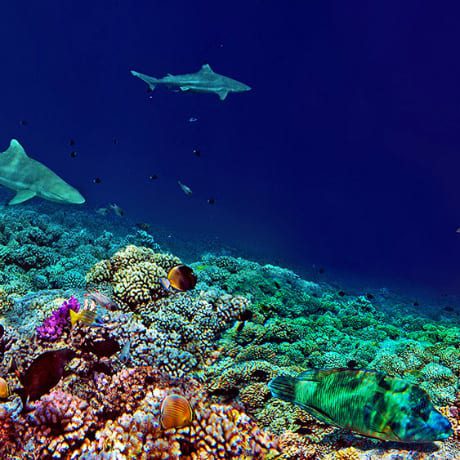 Coral well and truly alive and lots of reef sharks

Fakarava is, with Rangiroa (it’s little sister), the most famous atoll in all of French Polynesia for scuba diving. You can dive there all year round in warm water with excellent visibility. You come across all the species of the Tuamotu region, including numerous shark species, dolphins, rays, morays, and so on. Between June and July, lots of grouper fish gather there for mating season.

The sites are grouped into two passes that open the atoll and most dives are accessible to beginners.

On land, you can stay in a tiny little village, Rotoava, usually in charming little hotels. 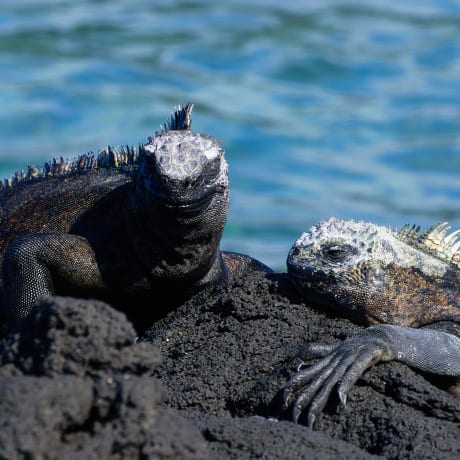 Marine iguanas are endemic in the Galapagos Islands 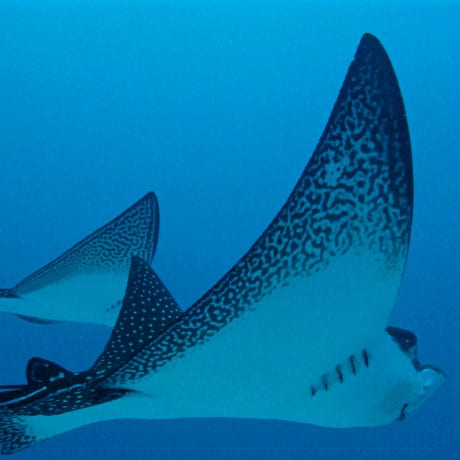 The Galapagos Islands are the famous archipelago where Charles Darwin developed his theory of evolution. People come here to see the abundance and diversity of animal life. On land, you can see the most intriguing creatures, often endemic, like the Galapagos tortoises. Under the sea, divers often come across gigantic and peaceful whale sharks, spotted rays, schools of hammerhead sharks, sea lions and more.

Some say you can just simply stay underwater without moving and let the show unfold. 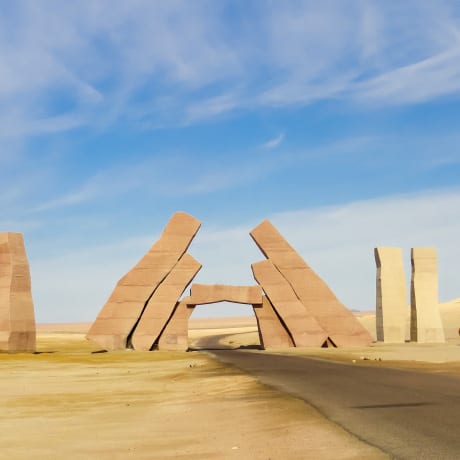 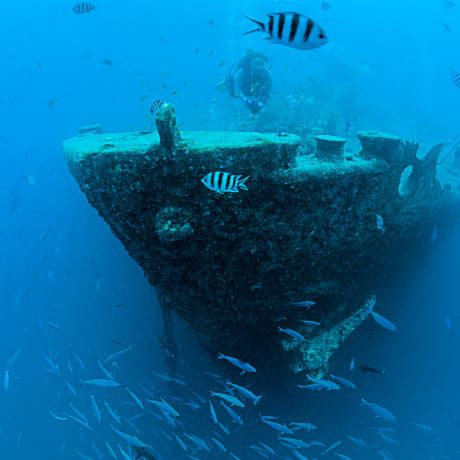 Ras Mohammed is a national park located in Egypt, at the tip of the Sinai Peninsula. Sharm El Sheikh, about 10 kilometres away, is the city where divers arrive.

The dives in the area are all spectacular. The shipwrecks are particularly captivating, like the one in Yolanda Reef, now entirely taken over by corals but which was originally transporting toilets, bath tubs and pipes. And, the impressive Thistlegorm shipwreck, a military ship a little further north of the park. It’s been really well preserved and still contains numerous vehicles. 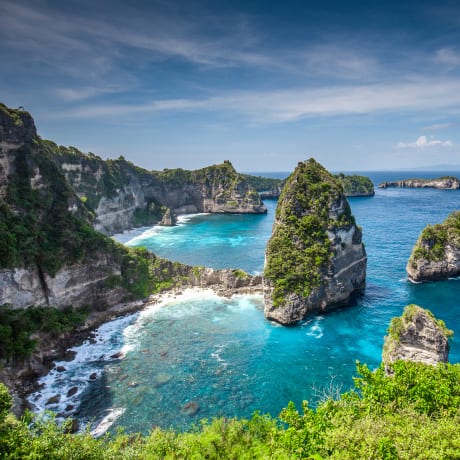 The cliffs of Nusa Penida 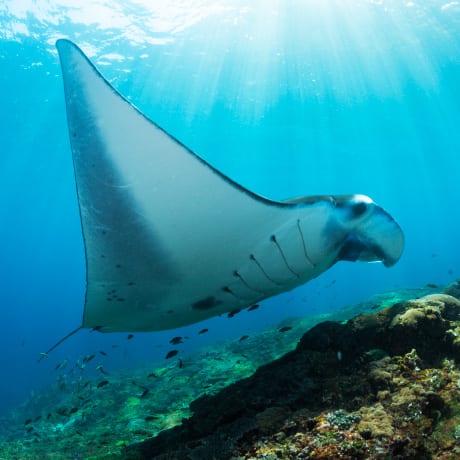 One of the many manta rays at Manta point

Nusa Penida is an island off the coast of Bali in Indonesia. Around here you can find some of the best diving spots in Bali. You’ll find most of the dive centres on the smaller island of Lembongan, less than two kilometres.

Unfortunately, two overcrowded sites stand out in particular. First there’s Manta Point, a cleaning station for manta rays. In the right season, you’re guaranteed to see lots of them close up. Then there’s Blue Corner in Crystal Bay, one of the sites where you can often see the great ocean sunfish. This enormous fish, almost circular, can grow to over three metres in diameter. 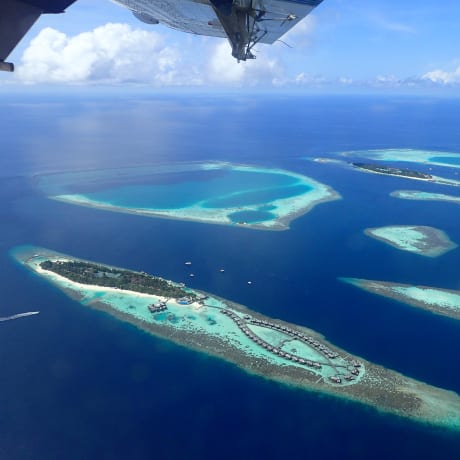 The Maldives from an aeroplane 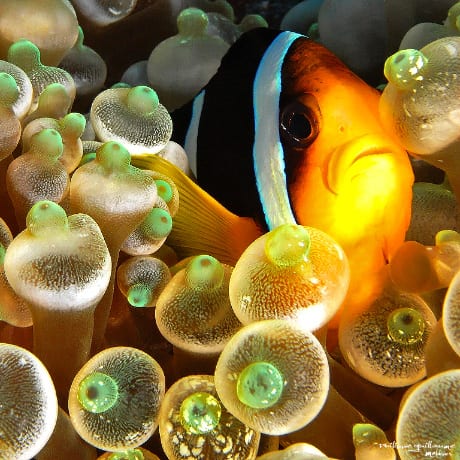 A close-up shot of a clownfish

The Maldives is a tropical country made up of countless islands lined with heavenly beaches and 26 coral atolls. The territorial waters are largely protected and it really shows. The sea life is abundant here.

You’ll often come across, amongst others, eagle rays, schools of Napoleon fish, barracudas, lots of manta rays and even the very rare whale shark. If you can afford it, the best way to take full advantage of diving is to go on a “liveaboard” boat for a few days so you can get to all the best spots, which are often further away from inhabited areas. 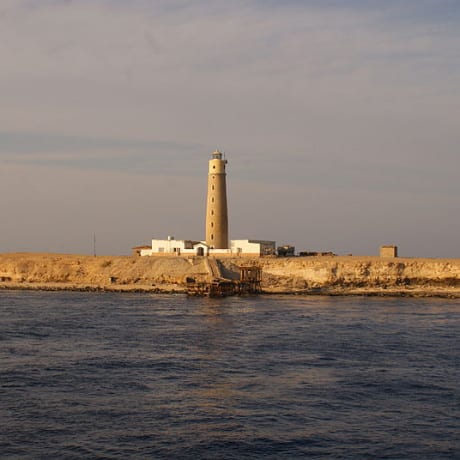 Big Brother is more of a boulder than an island 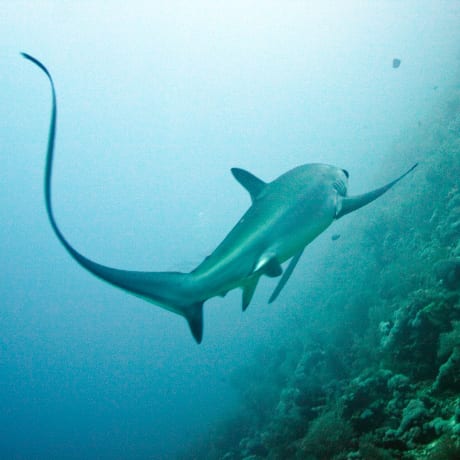 The Brother Islands are more like two huge desolated rocks than actual islands. There’s just a lighthouse and almost no vegetation at all. They’re very far offshore and people only go there for diving, on board a cruise ship for “liveaboard” divers.

The trip’s worth the detour. You see a lot of big fish there, but sharks are the star of the show over there. First, the big ocean shark, very common in this area, and then sometimes schools of hammerhead sharks or even the extremely rare thresher shark.

The vertical walls covered with perfectly preserved corals are absolutely stunning. You can dive around two impressive shipwrecks, also covered in spectacular corals.

Be careful, the dives there are technical and are for experienced divers only.